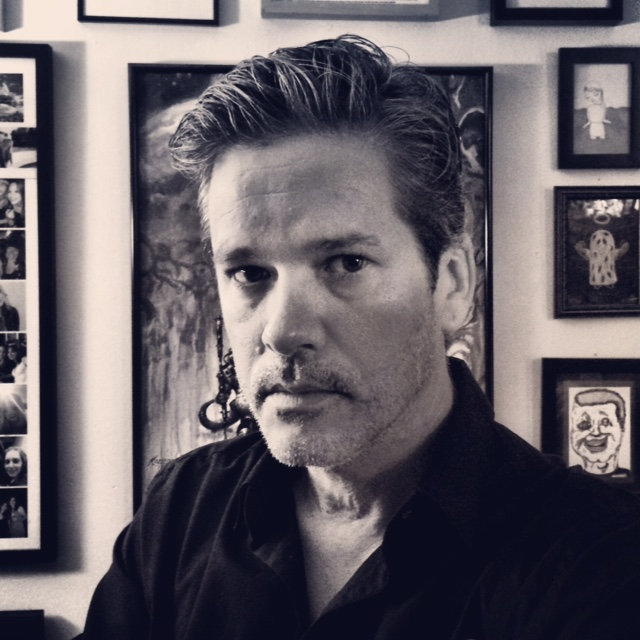 Musician, actor, and screenwriter Sean Keller took the time to chat with us in October and we talked about mixtapes, his multiple musical personalities, and of course, our mutual love of Halloween. Sean’s work includes writing the All That We Destroy episode of Hulu’s Into the Dark series (directed by his love Chelsea Stardust), Rage (starring Nicolas Cage – in which Sean also served as executive producer), and Giallo (starring Adrien Brody). With The Killer Sounds of Halloween, Sean combines his favorite medium, the mixtape, and pairs it with thirteen separate musical identities (all him), to create 45 minutes of absolute love for Halloween. Sean wrote and recorded all the songs himself, under band names such as Zombistein, Los Hombres Duendos, The Quickies, Fayna & the Lunarchicks, These Bloody Hands, The MotoPsychos, The Doom Buggies, and one of my personal favorites, Bon Jersey. Pulling the help of friends including Graham Skipper, Mary O’Neil, Natasha Kermani, and Amanda Wyss, the album was engineered, mixed and mastered by his son Folsom Keller, adding to the obvious love put into the project.

For those who don’t know, Keller has also contributed music to numerous films, including Satanic Panic, Beyond the Gates, and Tales of Halloween, as well as creating Slashed! The Musical.
As Sean explained in an interview with DailyDead.com “I’ve always been a songwriter struggling to find my own voice, and as a young singer I was always imitating people. I think that’s where it all comes from. Most recently, I’ve been doing a Halloween cover song, where I would take a song I thought was under-appreciated and cover it in the style of a completely different artist. I did Dolly Parton’s “Drinkenstein” (from her movie Rhinestone) and I did it in the style of White Zombie. The next year I did TV on the Radio’s “Wolf Like Me,” but in the style of Love and Rockets. It was from that sort of experimentation—between that and writing Slashed! The Musical, where I’d had to step outside of myself and do period stuff and depend on other talents to flesh it out—those are the things that led to this moment.”

You can purchase Sean’s Halloween mixtapes by visiting https://seankeller2.bandcamp.com/

As we mentioned above, Sean was gracious enough to take the time and answer a few questions for us. Here is just a portion of our wonderful conversation:

1. How was your neighborhood during Halloween?

I grew up in suburban, northern Virginia in the late 70s on a street with a cul-de-sac that was filled with school-age children, so trick or treating in our neighborhood was a dream. In my teen years I took joy in playing dead in a scarecrow costume until the trick or treaters knocked and then I’d jump up with a roar and freak them out.

2. What did your family do to celebrate Halloween (as a kid)?

As a family, we would always carve pumpkins together and watch “It’s the Great Pumpkin, Charlie Brown” together. I trick or treated with my little sister for years.

3. What is your all-time favorite Halloween song and album?

4. Do you think we will ever have a “Ray Bradbury: The Halloween Tree” type Halloween atmosphere and imagery in towns ever again?

Well, we aren’t going back I time, so not exactly, but Halloween is more popular than ever, and more places than ever have embraced to the romance of old-time Halloween traditions. I go apple picking every fall, visit farms and corn mazes and go to as many home haunts as I can.

5. As a kid, what was your favorite Halloween costume?

When I was seven, I spent all my birthday money and allowance on a Don Post Creature from the Black Lagoon mask. My mom sewed felt gloves for me and I wore green long johns. It was hot in that mask and I could barely see, but I thought I was real cool.

6. Do you think monsters will ever again reach the heights of mainstream popularity that was present during the Monster Craze of the 50s/60s?

A monster movie just won best picture. Monsters are all over kids tv. Monsters are everywhere. They are the mainstream now. You’re talking about a nostalgia for a thing, and it’s impossible to be nostalgic about the present, so it’s dismissed. I would argue that monsters have never been more popular.

7. What plans do you and your family have in store for Halloween this year and beyond? Have you, or do you think that you will create your own traditions?

I’ve been a dad for over 20 years, so I have a ton of traditions. Pumpkin carving parties, apple picking, home haunts, movie marathons. We start planning in August so we can do all the things every year.

8. In an article by Christopher Borrelli in The Chicago Tribune in 2016, “Halloween spending will hit a high this year of $8.4 billion, but less than 30 percent of families planning to celebrate Halloween will trick-or-treat.” What do you think can be done to bolster trick or treating in the United States, or is it a cyclical event that will eventually become popular again?

That statistic is overtly misleading. How many of these “families” have trick or treat aged kids? Mine are too old, so that isn’t a part of my night anymore, but every parent of a kid 1-15 goes trick or treating.

I miss trick or treating and now that my kids are grown, I’m done with that aspect of the holiday. But over-all my Halloween enjoyment grows each year. I find new ways to celebrate and my family is all-in on the holiday. 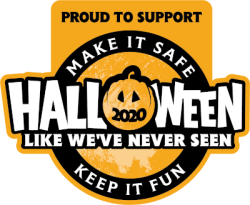